The Purpose of University of Victoria BandFest

BandFest is an encouraging, non-competitive music festival that provides an opportunity for students and directors to play for experienced adjudicators and learn from informative feedback by way of an on-stage clinic, written and spoken commentary, and an audio track of the band’s performance.

Since its inception, UVic BandFest has attracted over 1,200 Elementary, Middle School, Junior and Senior Secondary Schools representing over 72,000 performing young musicians from throughout Canada and the United States. In addition, over 60 of the finest wind band conductor/adjudicators from British Columbia, Alberta, Saskatchewan, Manitoba, Ontario, Washington, Oregon, North Dakota, Montana, Kansas, Maryland, Wisconsin and South Carolina have participated in the adjudication process at UVic BandFest. 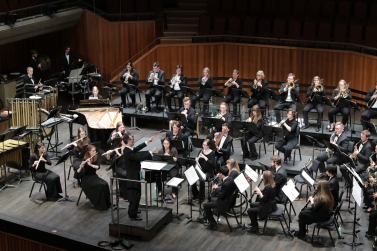 In addition to the adjudicator commentary, each band is given a rating of Superior, Excellent, Good, Fair, or Poor. These ratings are determined using the standardized and updated newly UVic BandFest Adjudication form.

For example, if a B100 band’s descriptors all lie in the middle of the sheet, it might result in a rating of Superior. However, if a B600 band merits the same score, their rating is only a Good.

BandFest takes place in The Farquhar at the University of Victoria. This beautiful auditorium hosts performances of UVic choral and instrumental ensembles, as well as professionals ranging from great musicians such as Wynton Marsalis to comedians such as Martin Short and everything in-between. The space is a beautiful acoustic and we look forward to welcoming young musicians to perform on our stage during BandFest each year!